Introducing… Jenny Raggett. To celebrate our fourth birthday we’re putting on an exhibition that brings together a selection of professional artists we’ve worked with since we entered the Frome art scene in 2015. One such artist is Jenny Raggett. 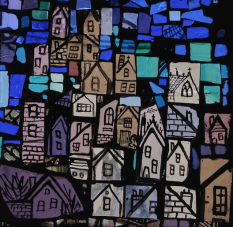 The first stage is the design. You then buy the coloured glass ready-made and then cut it into shapes according to the design, leaving a space between the pieces where the lead goes.

Now comes the painting. The details of the design are painted onto the glass with a  with a special mix of metal oxides (a bit like a very low temperature firing glaze in ceramics) which is then fired onto the glass in a kiln at about 660 degrees centigrade. The design is built up through a number of layers of painting and firing to achieve effects like shading, textures and so on.

Finally the pieces of glass are assembled with lead and soldered together to give the final product. Grout is used to waterproof and fix the panel properly

Her designs are often bold and feature both natural elements and urban environments. She shares a studio at the Silk Mill with ceramicist Steven Jenkins. Jenny is a member of Owl, an artist-led gift shop on Catherine Hill. It seems as soon as Jenny makes a new glass piece it sells within hours. Jenny finished her piece for To The Fore on the Thursday before the show opened.

Jenny is also a technical writer and is working on a history of the Internet for the lay-person. Being married to Dave Raggett, who had a hand in the creation of the Internet, Jenny has a unique insight into how the Internet was formed and the mindset of those who gave the web to the world. We’re helping Jenny with the layout and design of the book, so keep an eye out for news later on in the year. 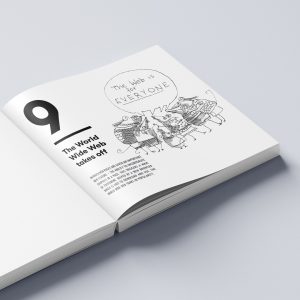 Jenny is based in Frome. Visit her website: https://picturesinsideglass.com/